When introducing the Frankfurter Crown Roast I mentioned that there is a distinctively German way to mistreat sausages. It is called Würstchengulasch (sausage stew). And I don’t mean an atrocity of the distant past here, we’re talking German home cooking 2013 style.

When making proper goulash (or pörkölt to be more ecxact), you automatically get a delicious sauce from paprika, meat juices and onions. But his takes time.

Wieners have the incredible advantge that they are already cooked. They just don’t make a good sauce when cooked. In fact they don’t make any. So the talented food chemists at Knorr (and of course also Maggi) whipped up a “Fix”. 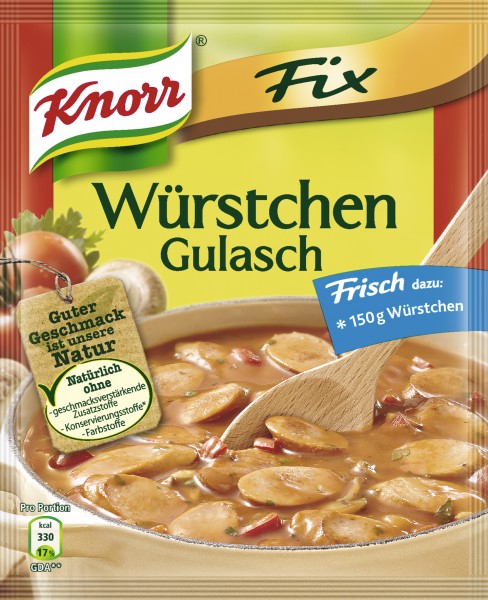 Chop the sausages, add water and a bag of Fix, cook for five minutes, and a you can enjoy your bowl of horse puke.

Here are two exciting products that will widen your SPAM horizons. In their secrect laboratories underneath Minnesota, the Spammers have created extensions to their product range that will make your most atrocious dreams come true: 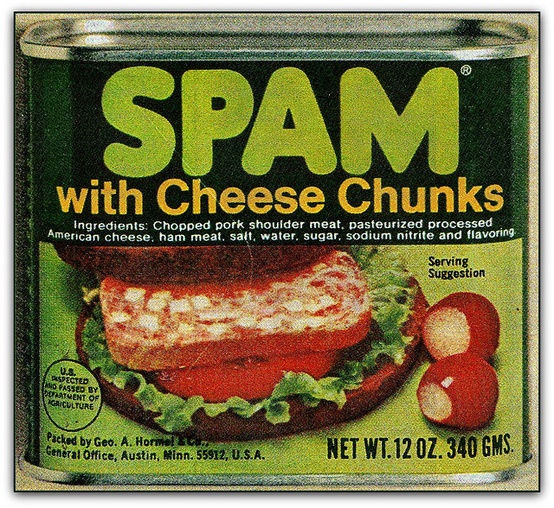 Taking the concept one step further, the cheez is already included here. Perfect for sushi!

Now what do you think is the best drink to go with sizzling steaks and hamburgers from the grill or succulent meat from the barbecue smoker? Coke? Bud Light? Beer? No, you’re so wrong. 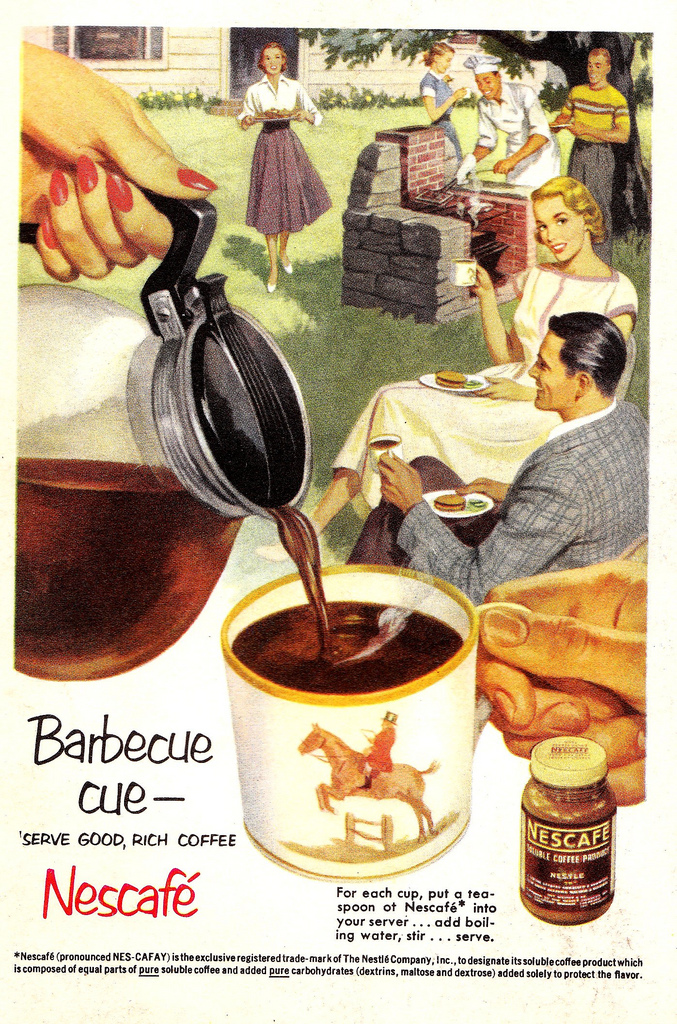 Of course it is coffee! Actually it is a mix of equal parts pure soluble coffee and pure carbohydrates. Simply irresistible.

You can still buy it today, but especially in the 1960s and 1970s cheap lumpfish caviar was very popular in Germany as a substitute for the hideously expensive sturgeon caviar. For that touch of mock luxury in your home.

I got hold of a 1970 recipe brochure issued by Christensen, a major producer of German caviar featuring some astonishing combinations. 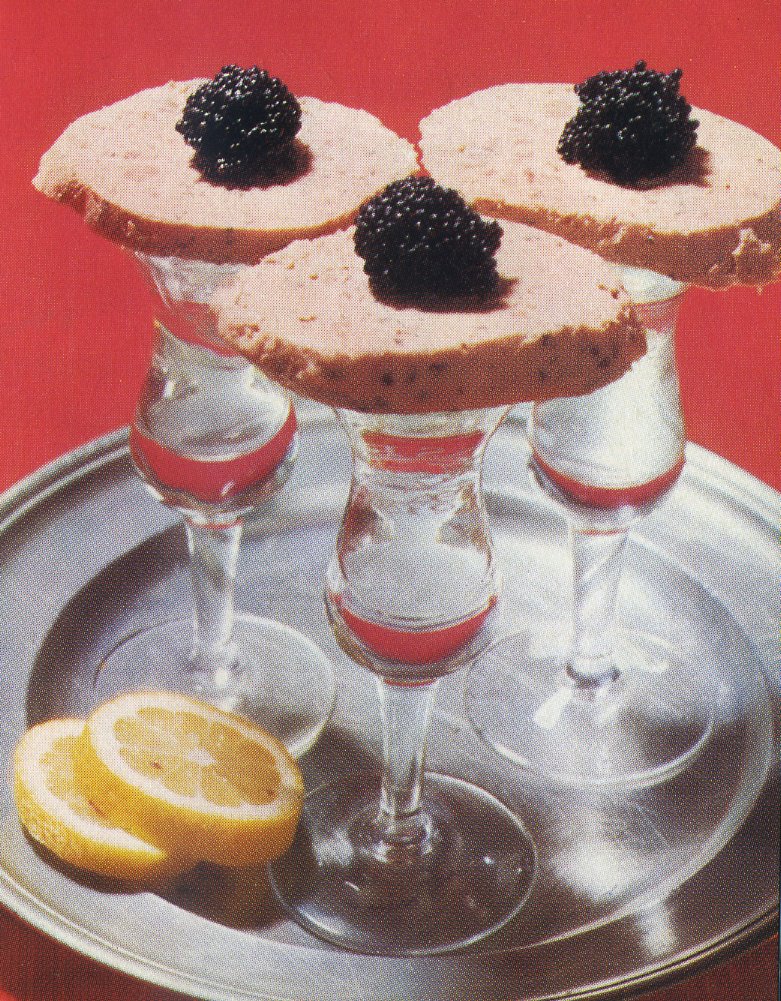 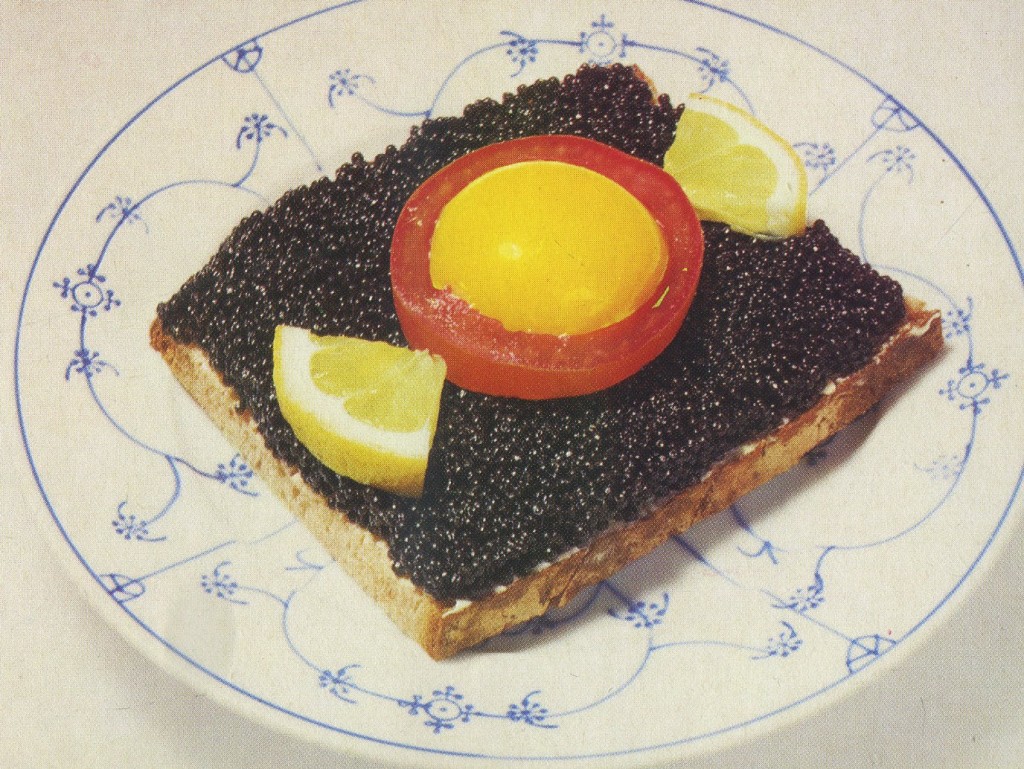 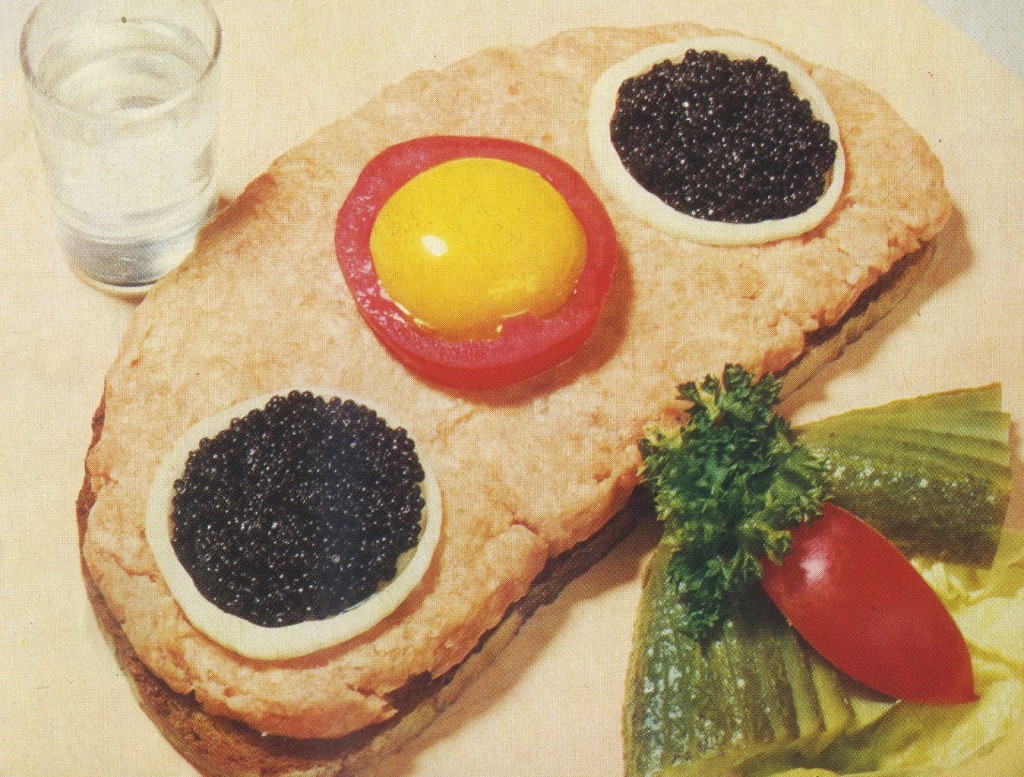 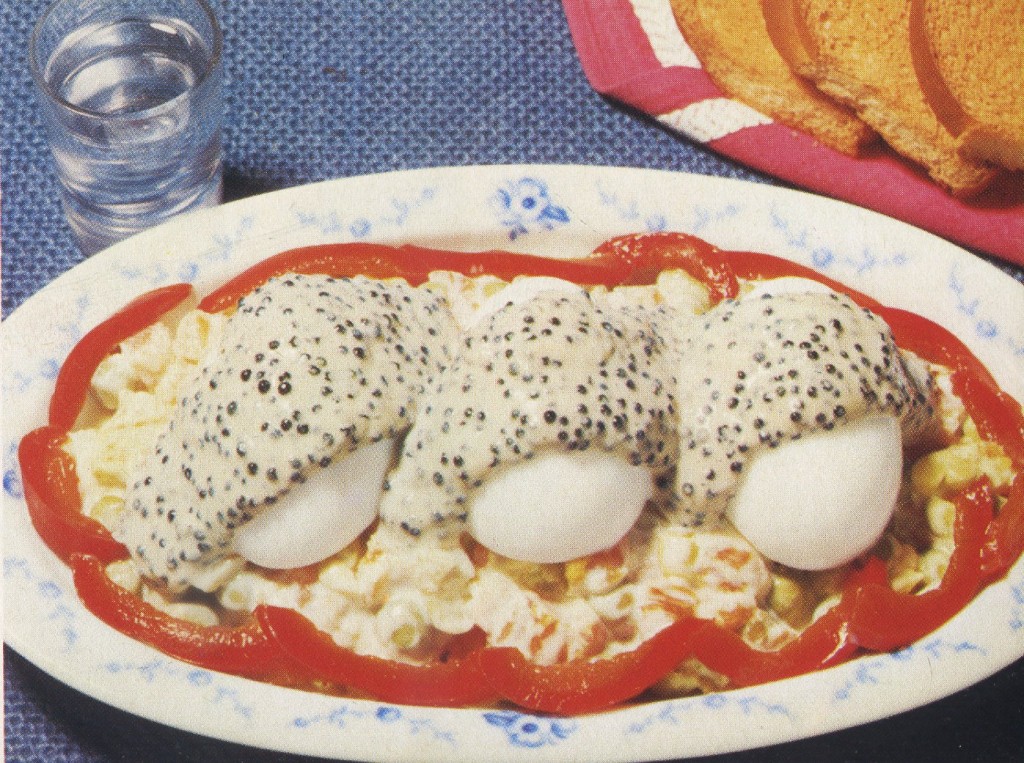 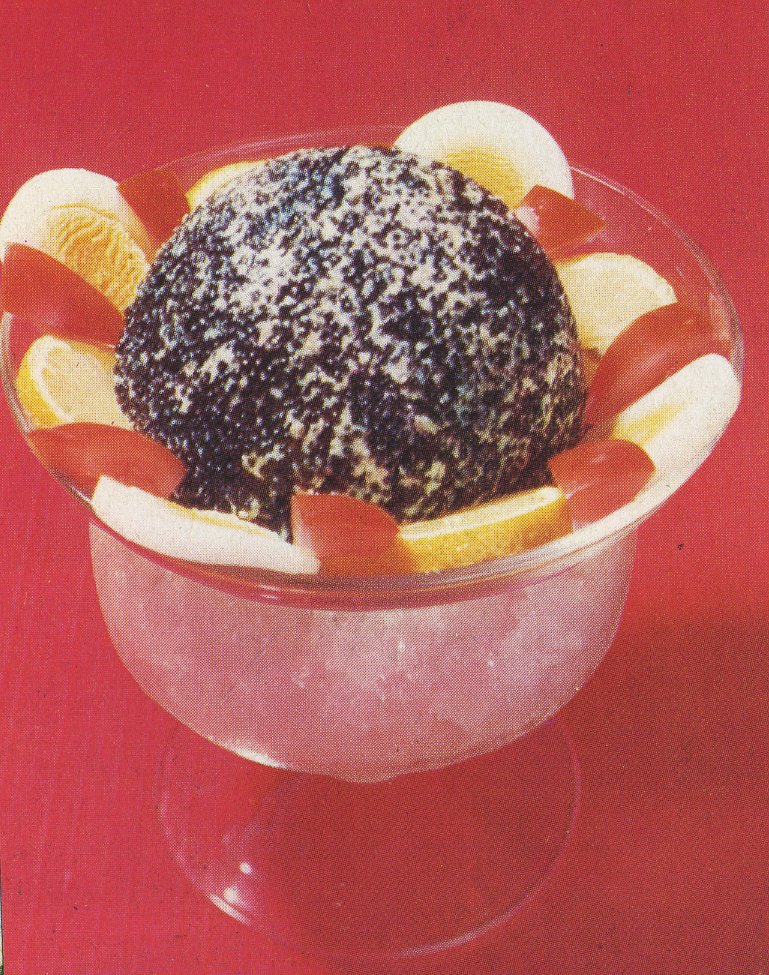 ‘Festive Caviar Bomb’ – Mixed with butter and horseradish, cooled in a mold 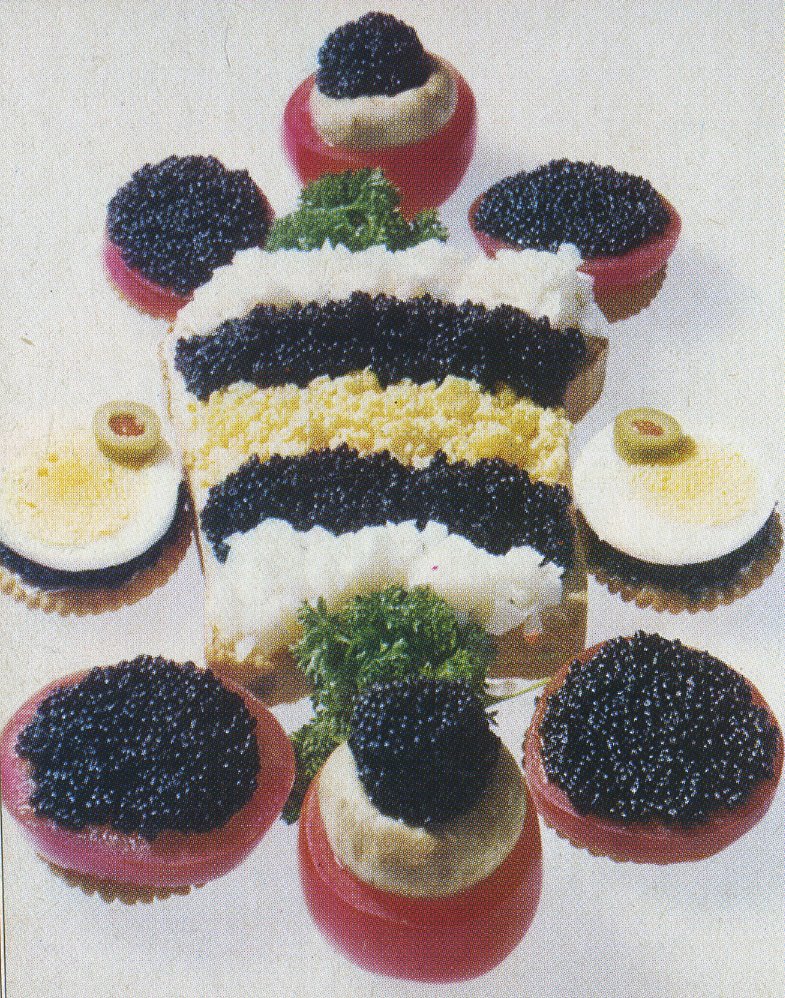 ‘Caviar Collier Necklace for the Fist Lady’ – With chopped eggs, the unavaoidable pimento-stuffed olives and tomatoes 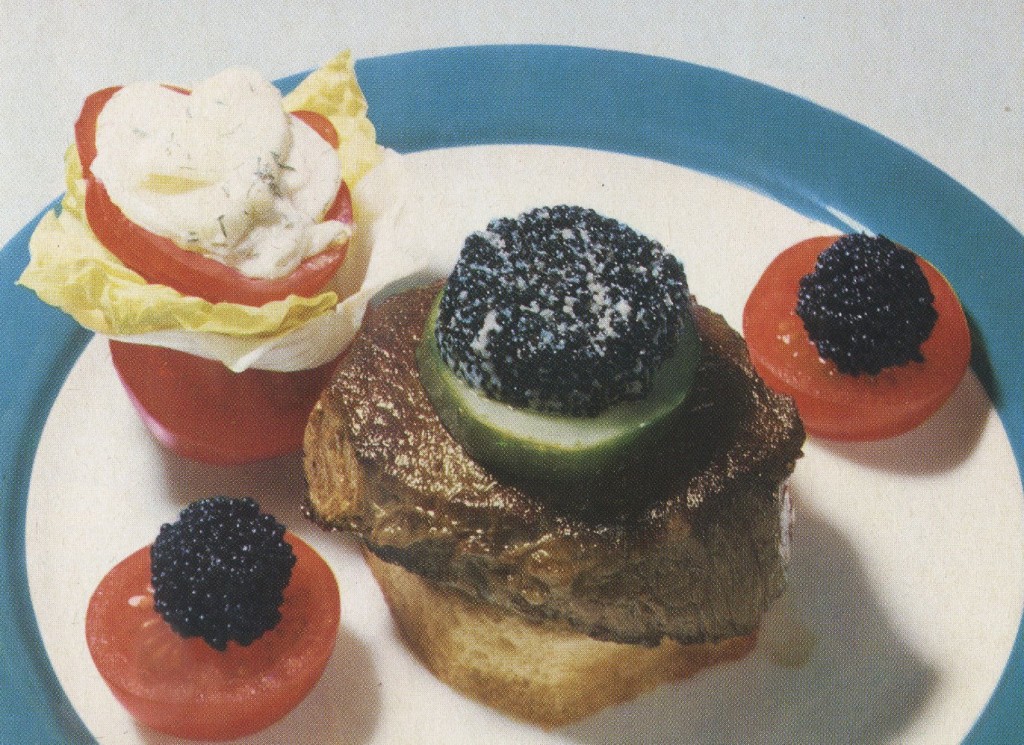 The common jello salad is a dish on its own, its visual appearance makes it the star of the dinner table. But how about serving jello as a side? 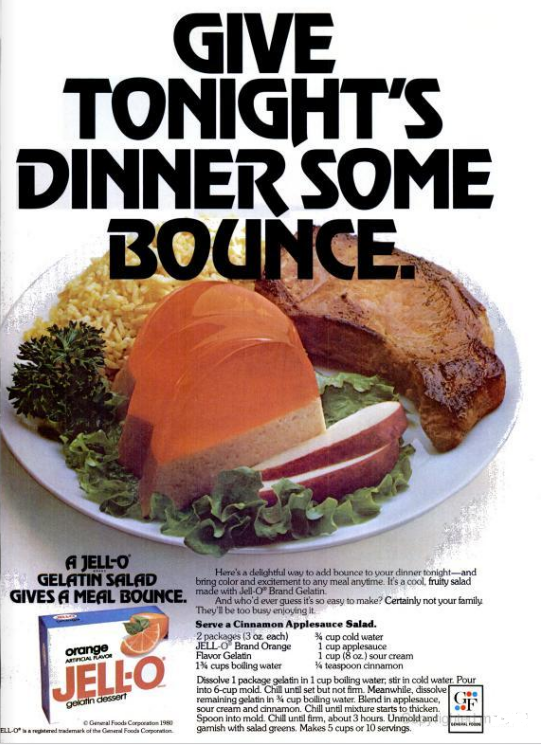 This colourful mix of orange jello and congealed creamed applesauce is just perfect to go with your steak dinner. And why not put in on top to melt like herb butter?

TV dinners are undisputably one of mankinds greatest inventions. Countless mariages have been saved by the possibility to dine and watch football simultaneously. Even exotic meals are readily available. 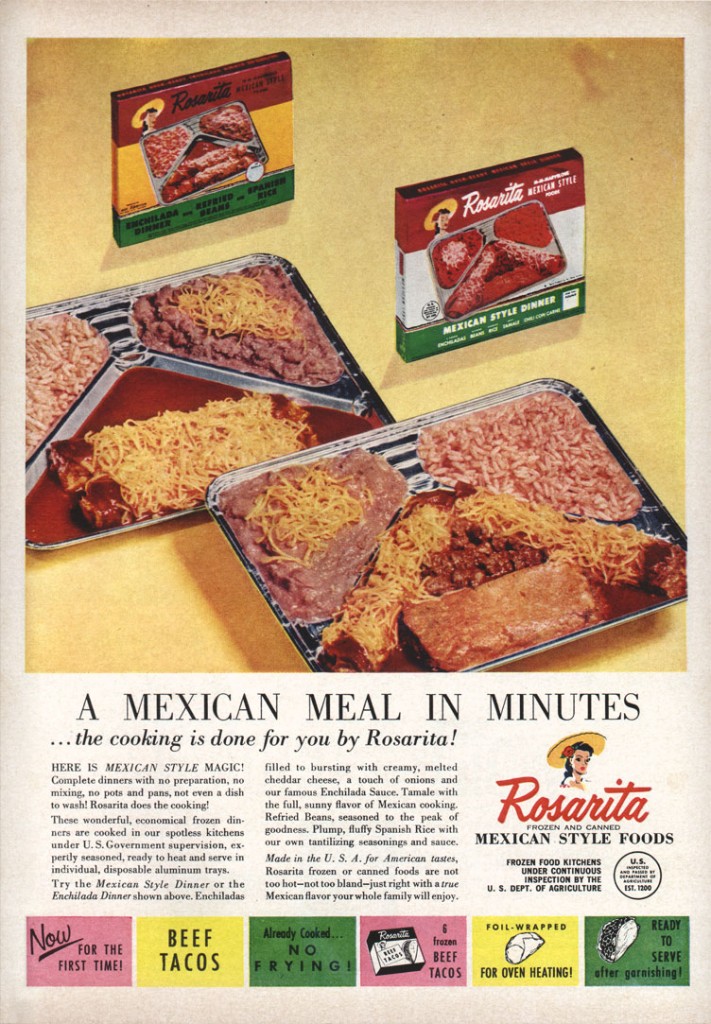 Montezuma’s revenge in three different flavours, made in the U. S. A. for American tastes and cooked in spotless kitchens under U.S. Government supervision.

Why is it that so much of the 1950s/1960s food looks like vomit? I And what are those curly things at the left? They look alive. Regardless of what the caption says: Don’t try to do this at home! 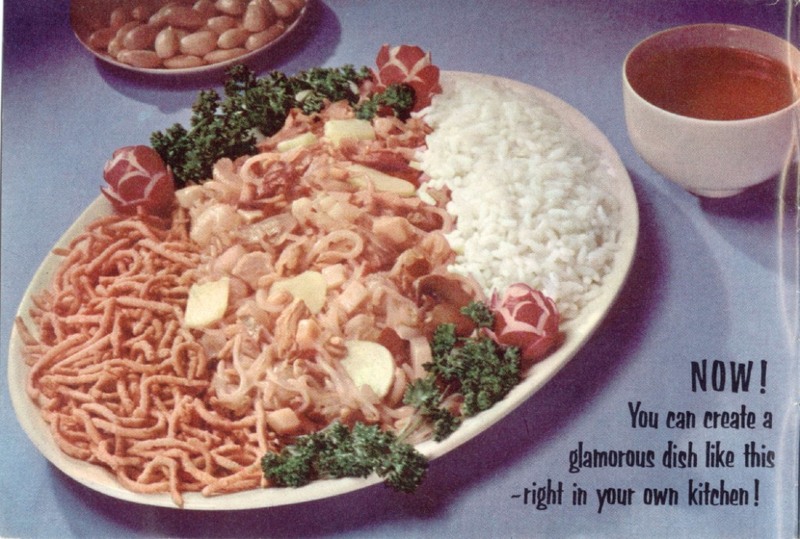 Recently I came across a recipe book issued in 1963 by a German association for the promotion of dairy products. It has quite a few pictures in varying levels of grossness; here is the top of the crop: 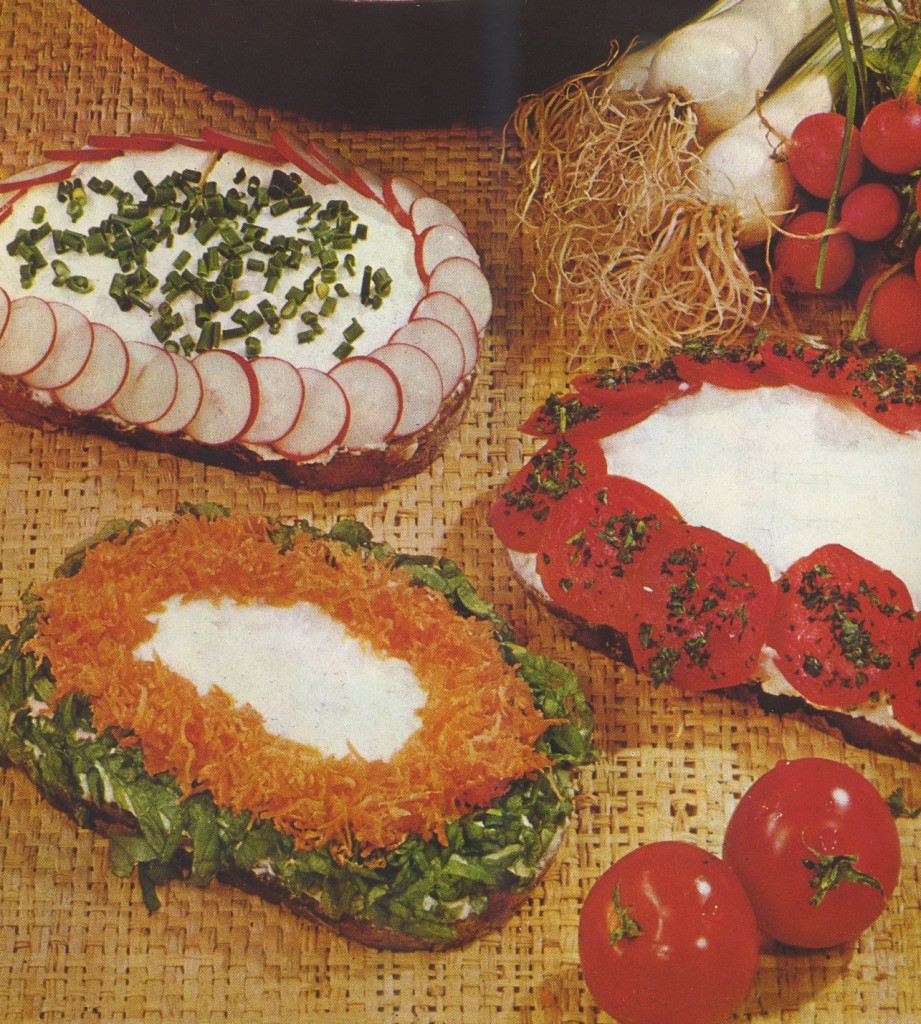 What looks like embroidered slippers for aliens are slices of bread topped with quark and funky vegetables. 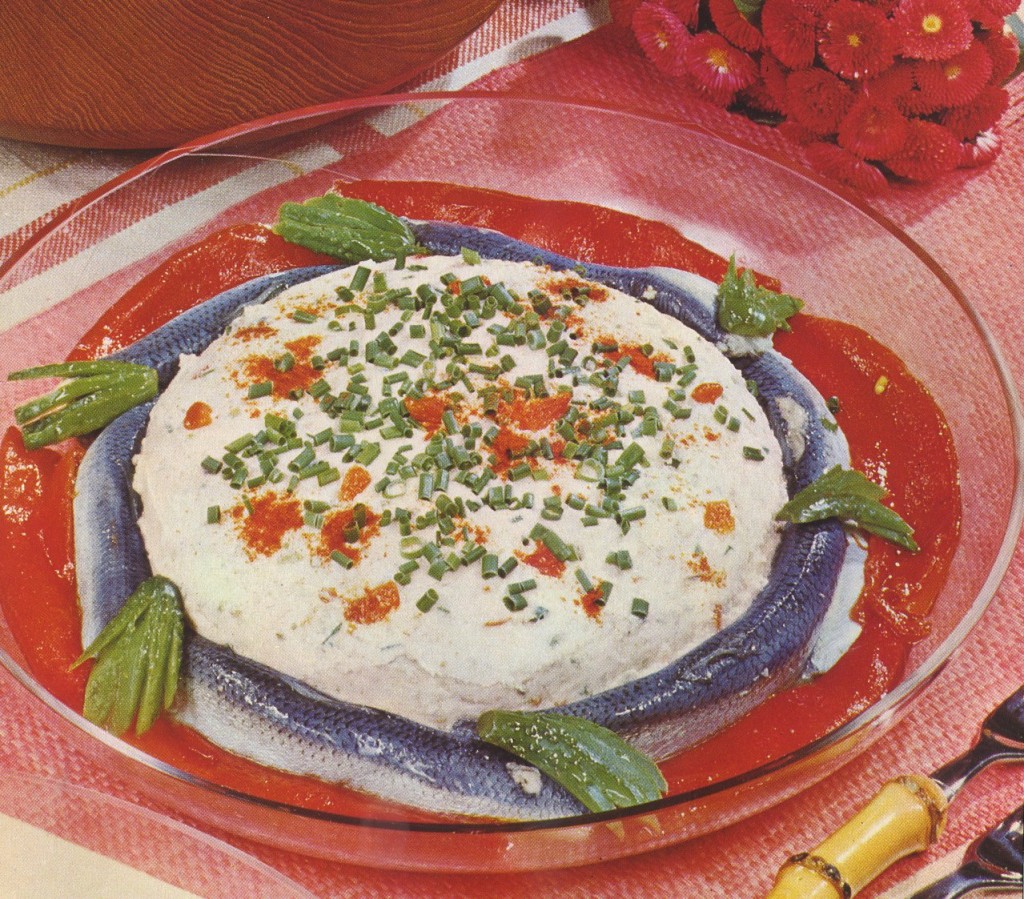 Pickled herrings in an around quark and gherkins used as a cheesy seaweed imitation. 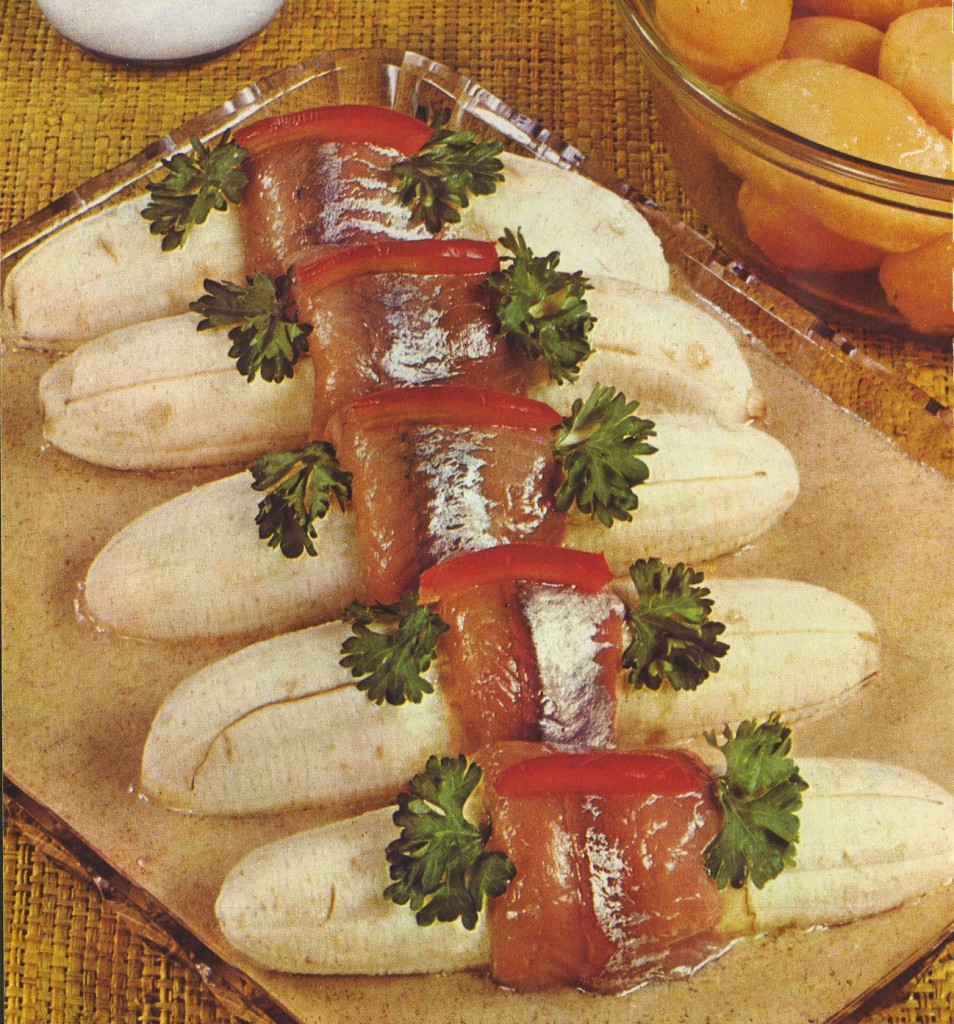 No guess games with this one – Bananas wrapped in brined ‘Matjes’ herrings, must be a tradtional dish from Ecuador. Germans LOVE herrings. Where is the milk? Only used to clean the fish from the brine, thank god. 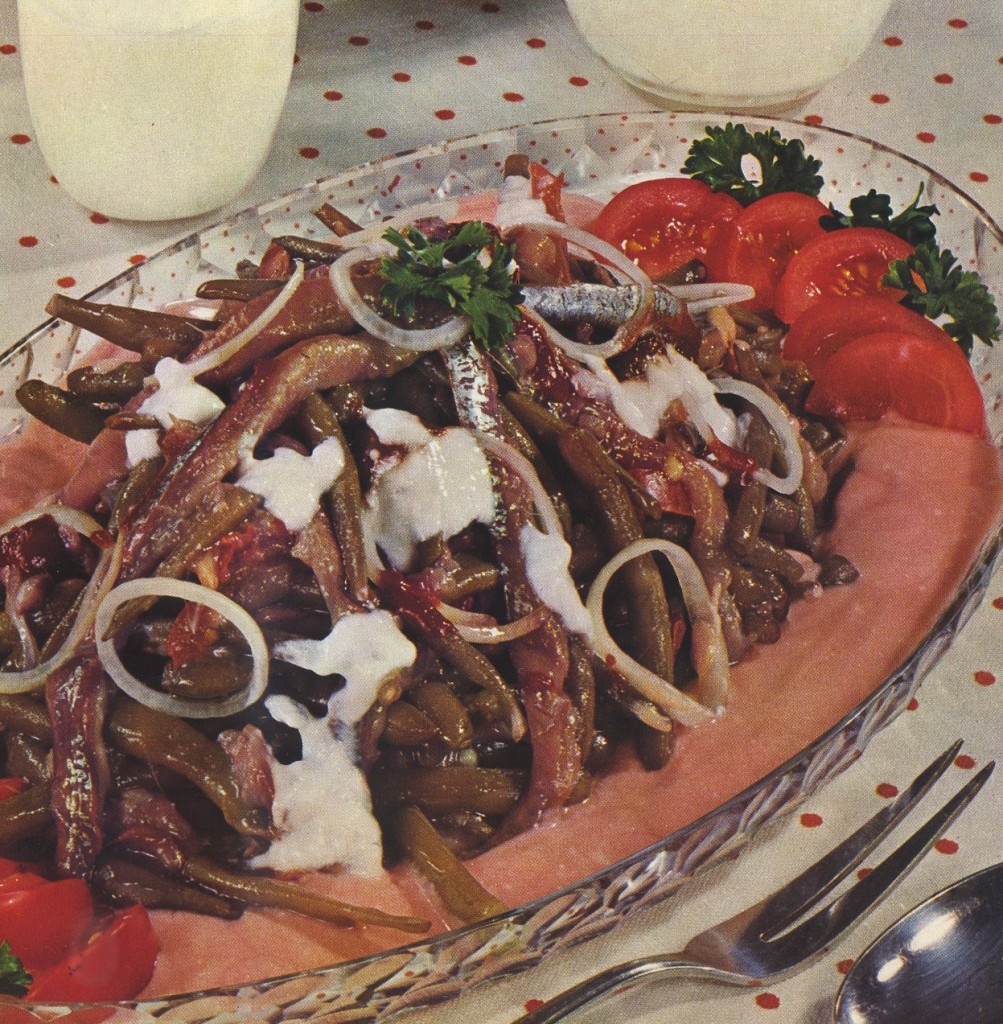 And for the climactic finale it’s brined herring yet again, this time served with green beans and topped with an appetizing load of white goo.

A proper crown roast is an impressive – some might say barbaric with all those bones sticking out – sight on a table. It is a show-off piece that demonstrates that you want to serve high class food to your guests – provided you are able to cook it properly. 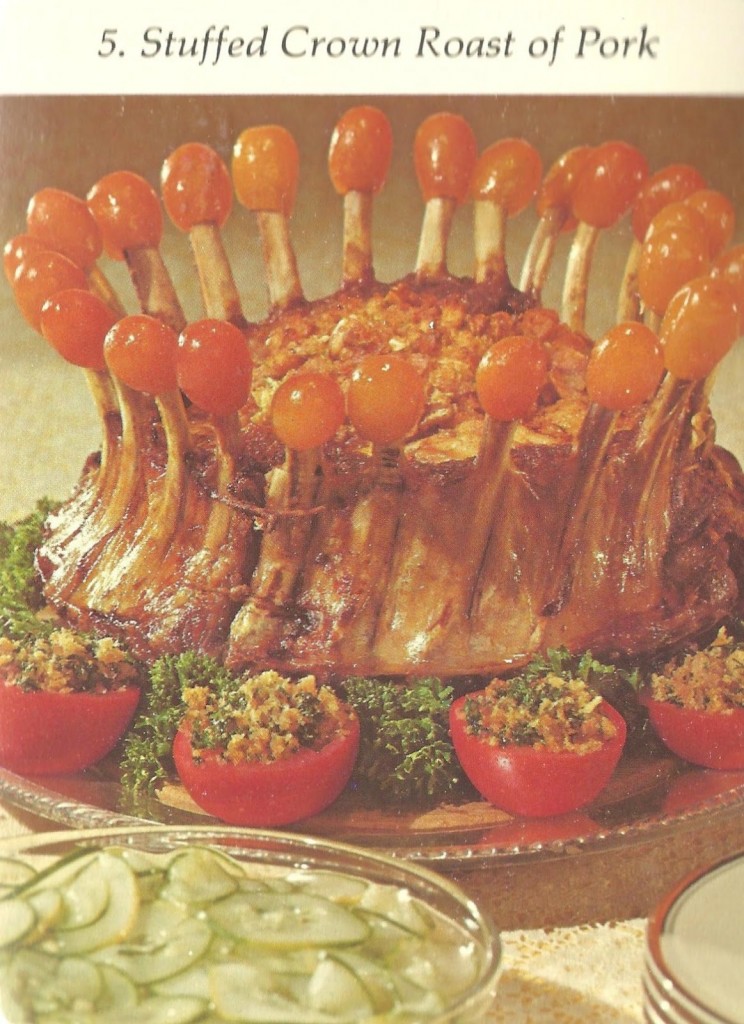 Here we have a particularly cheesy version with kumquat-decorated bones surrounded by tomatoes stuffed with something.

But of course there is also the poor-man’s version of the crown, made with weenies. 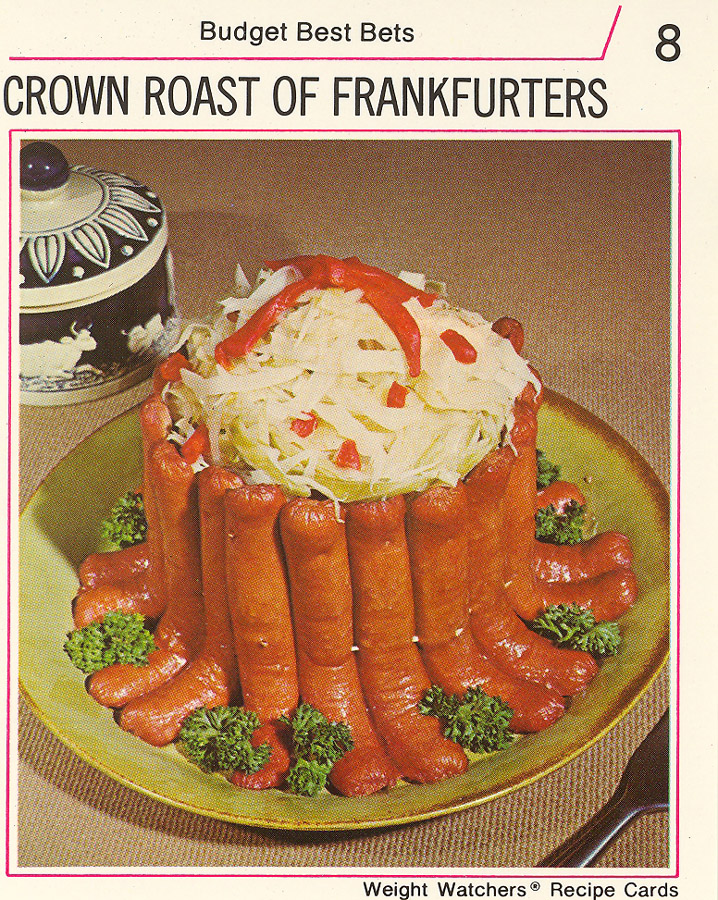 The Weight Watchers’ interpretation of this classic is served with cabbage – presumably to keep it in ‘authentic’ German style. Well, I am glad to confirm that this way of serving sausages is hugely unpopular in Germany. We have our own way of serving wieners atrociously. Stay tuned. 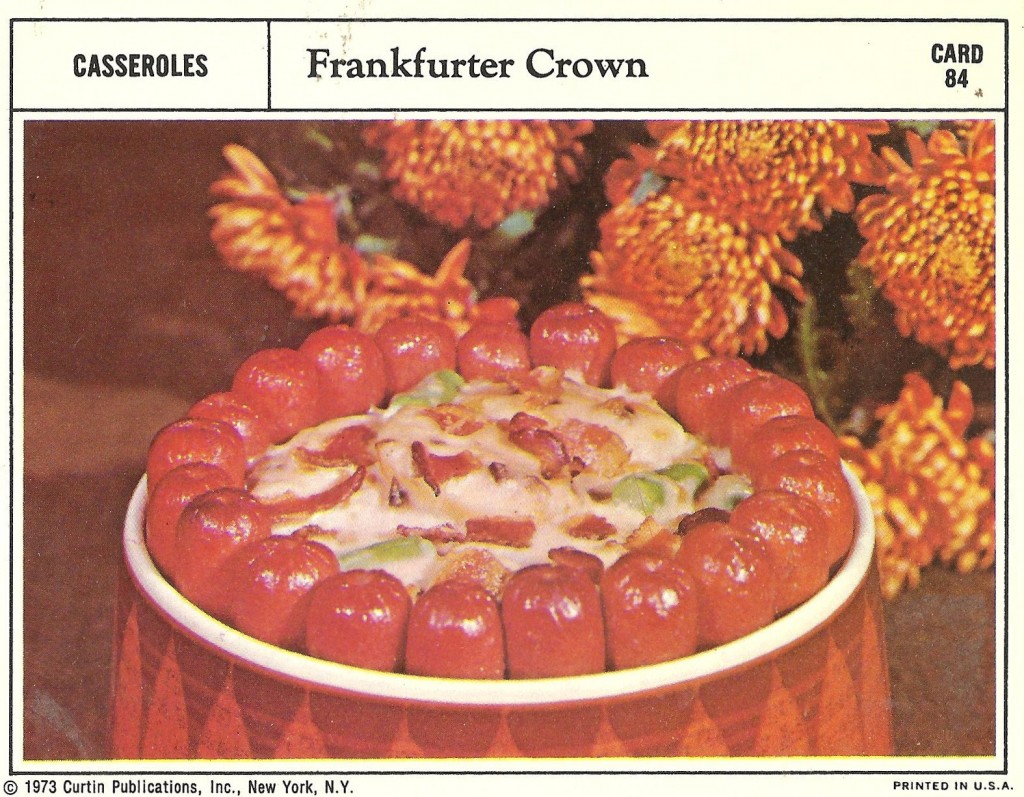 If you stick the franks into a casserole, you can also fill the ‘crown’ with vomit… 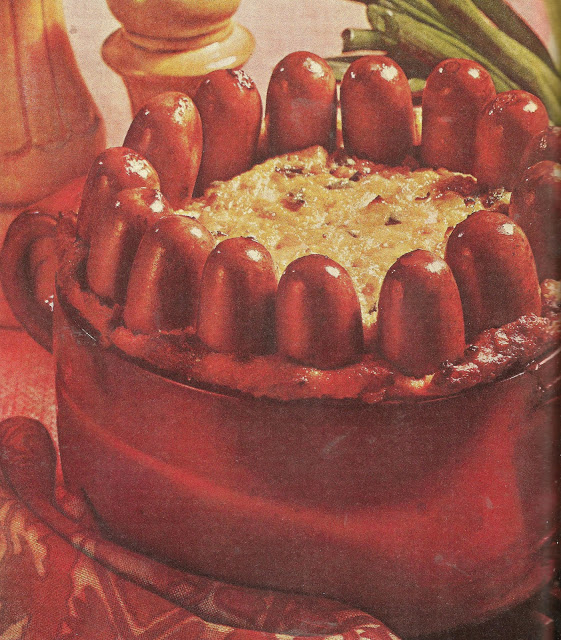 And when things really get tough, you can always resort to the lettuce stuffing: 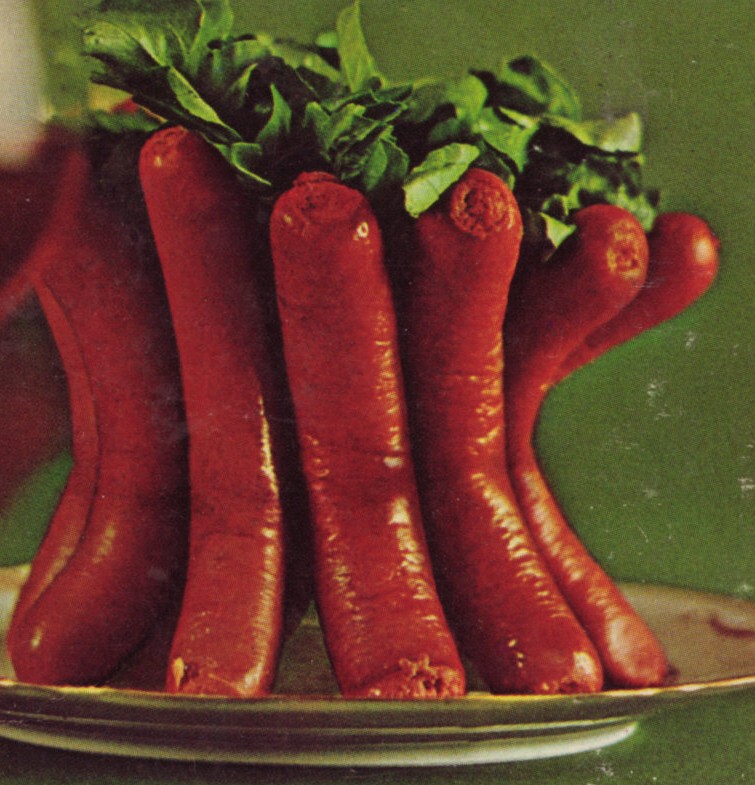 Most pictures courtesy of Bad and Ugly of Retro Food

Whales, Seals And Horses – Or What Is An Atrocity Anyway?

Please allow me to interrupt the flow of jello salads and other monstrosities to reflect on some more serious aspects of the concept of culinary atrocities and food taboos.

In “Wir kochen gut”, an East German cookbook from the early 1960s I found a section devoted to whale meat: 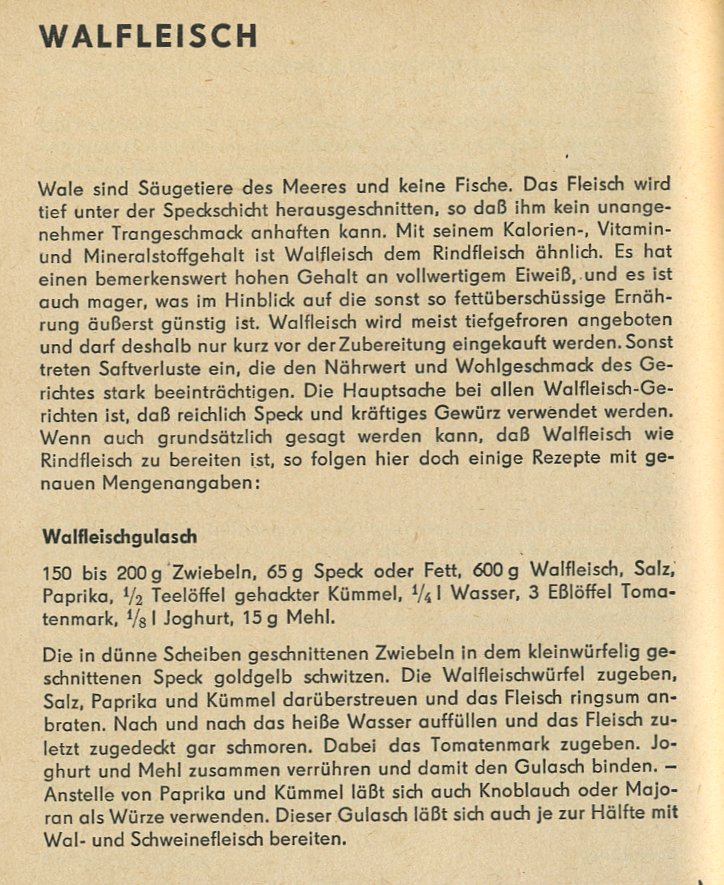 This does look rather weird in a German cookbook. Our country is not particularly well known for its love to whale meat. But probably East Germany had a contingent of Soviet whale meat in the final days of global whale hunting.

On a related note Canadian whisky blogger Graham McKenney sent me a picture of a recipe for “Flipper Pie” made from seal meat. 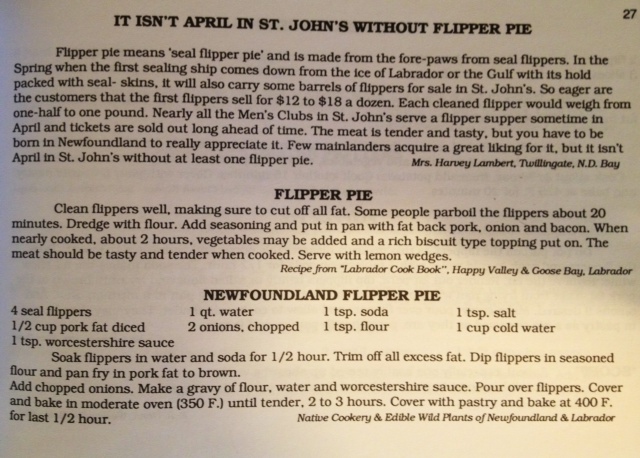 Of course this immediately makes us think of the shocking pictures of blood-covered bodies from the annual seal hunting season in Northeast Canada.

The two are a bit different, though. Whales had been hunted until they were nearly extinct. The near global ban on whale meat (hello Japan…) was lile pulling the emergency break on a train. This has led to whale meat becoming a taboo in most countries, and even if populations would become large enough for sustainable hunting again, it is highly doubtful if whale meat would ever be a popular staple other than in tradtional whale hunting countries.

When herring populations go down, temporary fishing bans are in place. Then the killing continues. Nobody will offer “herring watching” tours for diving tourists like it is done for whales or dolphins. A herring is just a small fish after all. But is it less worthy than a whale?

While some seal species have shared the fate of whales, the harp seals hunted in Canada are not endangered. It’s the bloody business of their killing that has made seal meat just as much a taboo.

Seals are slaughtered on open ice, the pictures went around the world and turned many stomachs. Slaughtering of cows and pigs happens behind the wall of abbatoirs, so we cannot see it, but it is slaughtering nontheless, and it is industrialized. And many consumers who cry out because of the cruelty of foie gras production don’t give a damn if the chickens and turkeys they eat have spent their short lives in concentration camps.

Here we encounter the widespread doublethink in food, meat in particular. Currently the horsemeat scandal is rocking Europe. Apart from the fact that there is a lot of criminal energy involved in sneaking undeclared meat into the ridiculously twisted industrial food chain, it also highlights the status of horsemeat as a taboo food in many countries, especially in anglo-saxon ones. But is a cow less worthy than a horse?

In many non-western regions of the world, people happily eat maggots, crickets, cockroaches and other “disgusting” animals. We eat shrimps, lobsters and oysters that look pretty yucky to the uninitiated too.

The concept of a culinary atrocity is as flexible as a slice of processd cheese and as wobbly as a blob of jello; a mix of personal taste, cultural background and true grue.

What to make of all this… Turn vegan? Then we’d have to get rid of woollen jumpers, leather shoes, natural hair brushes and other animal products as well beacuse they all are based on the exploitation of animals. Which leads us to the question if an apple is less worthy than a chicken? Humans seem to be struggling with the fact that they are a part of nature and not outside of it. But we are the one species capable of respect for all of nature because otherwise our dominance could eventually endanger ourselves.