Just when you think you have seen it all, something new comes along… The creativity wasted on jello salads never ceases to amaze me. 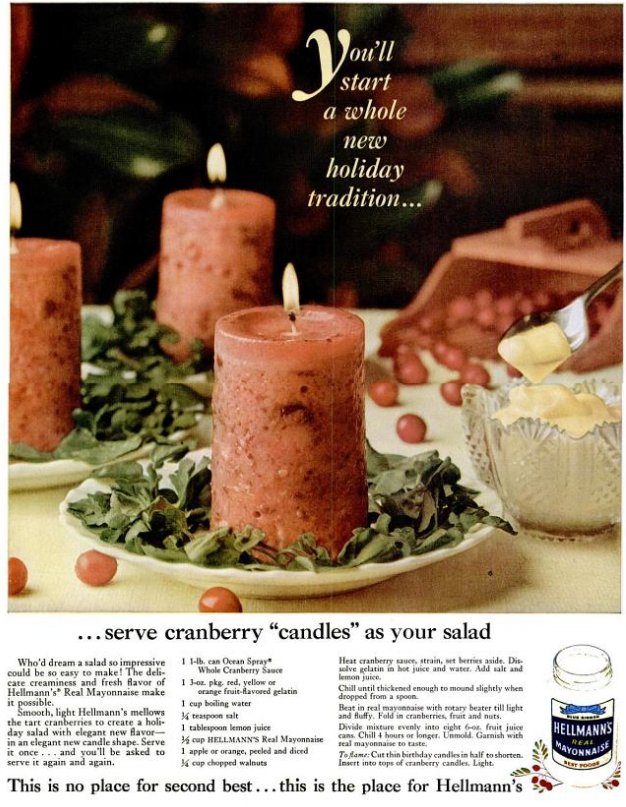 A jello salad from cranberries, nuts and maynonnaise is already pretty gross. Sticking in a candle to create a festive mood is brining this to yet another level. I wonder if and where that whole new tradition has actually caught on.

After yesterday’s burrito pizza why not carry on with Mexican fusion cuisine, 1970s style. 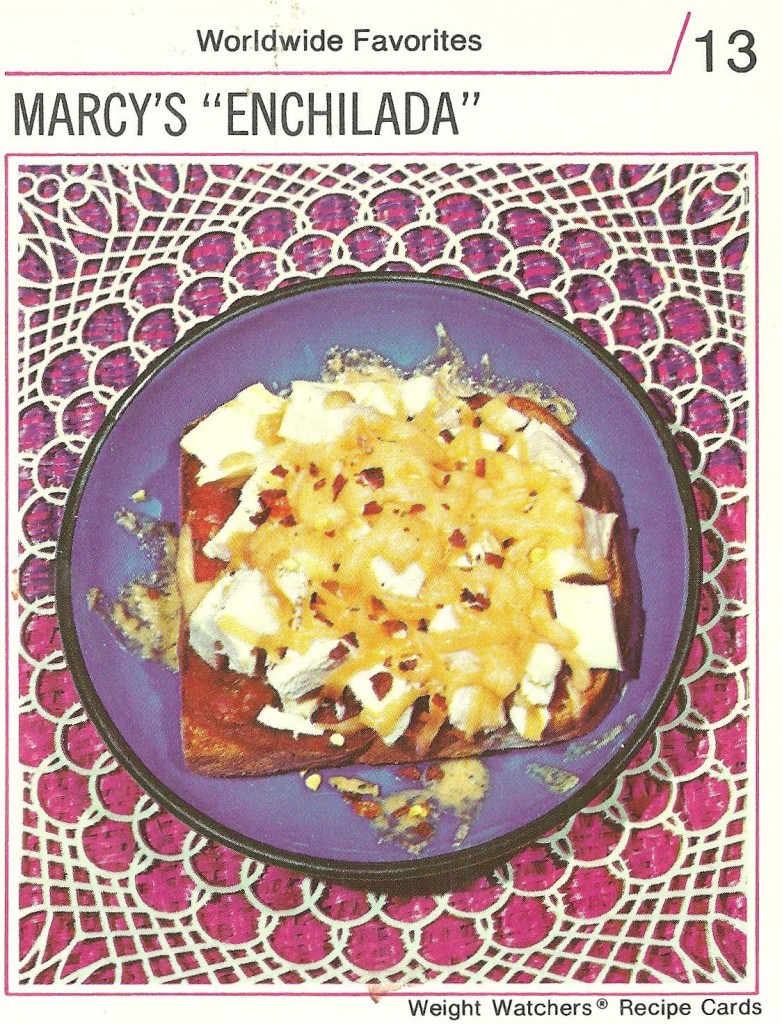 Anyone unfamiliar with Mexican food may come to the conclusion here that an “Enchilada” is a slice of bread that has been thrown up upon. Please figure out the consituents yourself while I try to suppress my gag reflex. 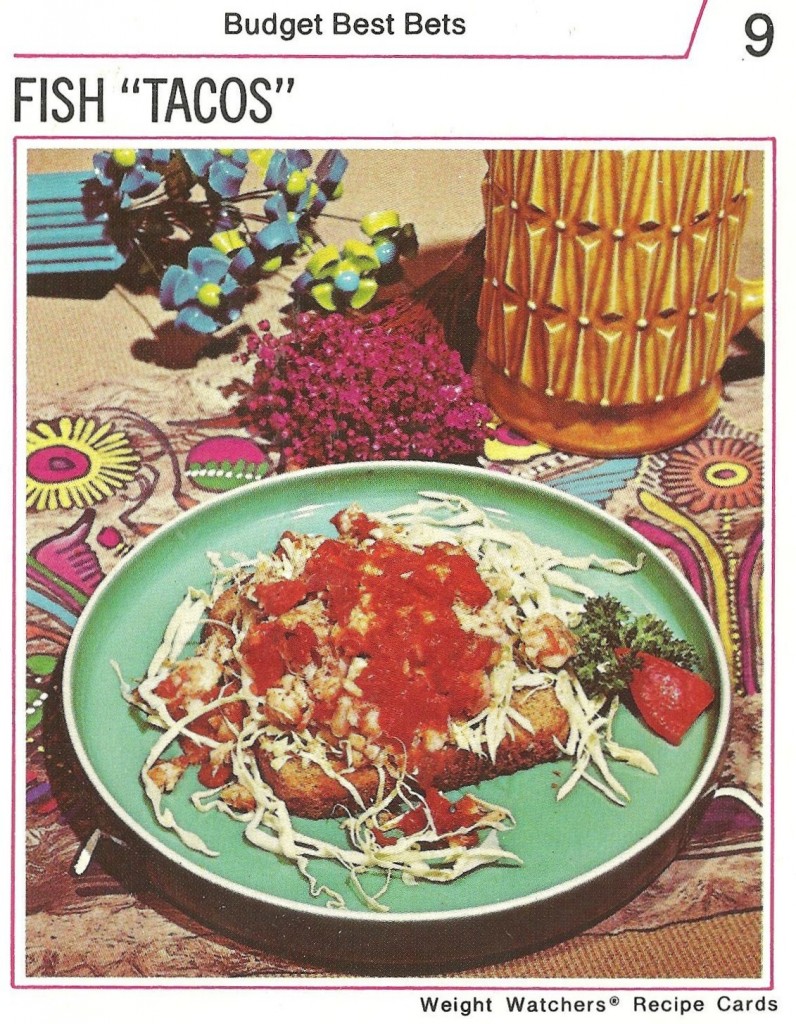 Anyone unfamiliar with Mexican food may come to the conclusion here that a “Taco” is a slice of bread that has been thrown up upon. Wait a minute. Wasn’t that an “Enchilada”? Perhaps the two differ by the time between ingestion and discharge. The raw shredded cabbage here is still completely intact.

Those Weight Watcher’s recipe cards have been circulating on the net for quite a while. Credits go to the excellent Bad and Ugly of Retro Food blog where many of these are presented in high-res scans.

“Sometimes you’ll go to a pizza place
You go to shakey’s to get that American kind of pizza
That has the ugly, waxey, fake yellow
Kind of cheese on the top…
Maybe you’ll go to straw hat pizza,
To get all those artificial ingredients
That never belonged on a pizza in the first place
(but the white people really like it…)”

I admit that I am spoilt by good Italian food. Munich is sometimes called “Italy’s northernmost town”, and high quality authentic Italian food is no problem to find. So I was pretty shocked when I first saw the Chef Boy-Ar-Dee ads for their pizza mix that feature ‘ethnic’ toppings.

Granted, there are some Michelin-starred chefs who make fantastic fusion cuisine, but on the home-cooking level things can become disastrous pretty quickly. 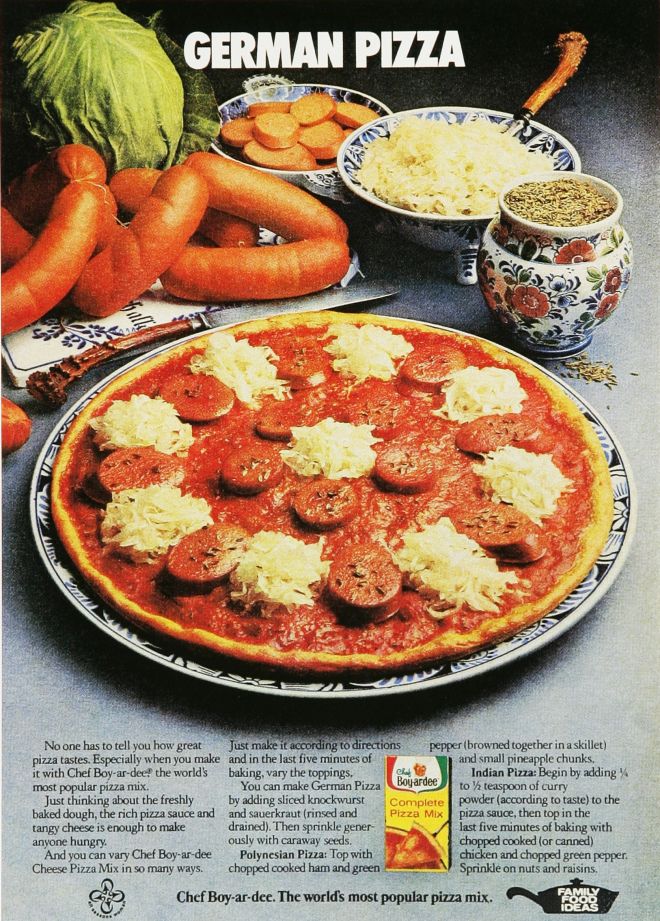 Sauerkraut, sausage and caraway seeds  – a perfectly authentic German dish dumped on a wheel of pizza dough and pizza sauce. I guess this invokes some degree of disgust even if you are not German. Other suggestions are ‘Polynesian’ with ham (Spam?) and pineapples and ‘Indian’ with curry chicken, nuts and raisins. Yuck. Next please. 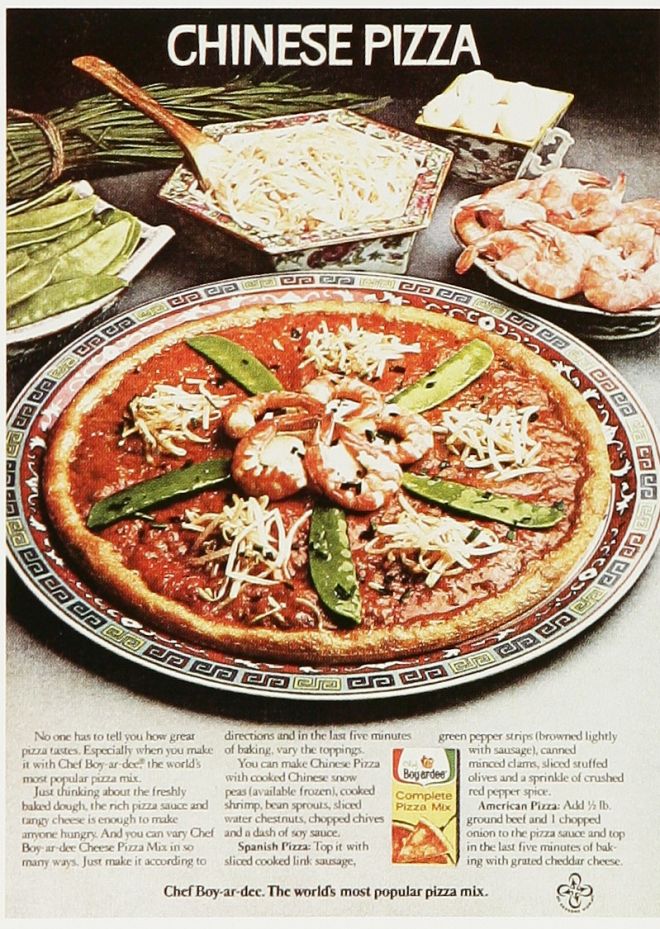 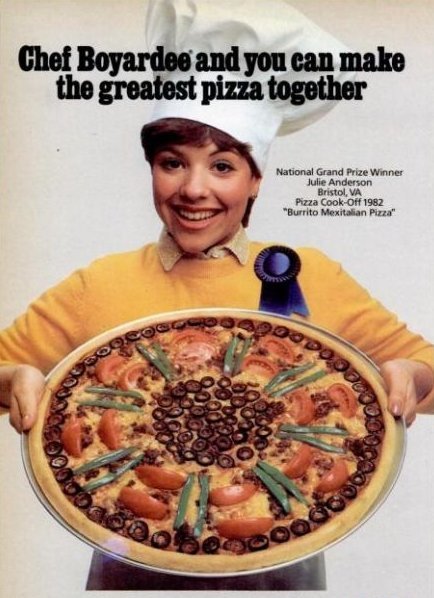 But if you are still hungry, you can try a slice of the award-winning “Burrito Mexitalian Pizza”.

Yesterday Steve Ury from the L.A. based food and whisky blog Sku’s Recent Eats asked why this site focuses so much on American culinary atrocities. Fair enough, after all I am German and – what’s even better (or is it worse?) – I was born into the end of the Dark Ages of German food. So I can confirm that Europe in general and Germany in particluar do indeed have ther fair share of gastronomic failures. And I will try to maintain a transatlantic perspective. 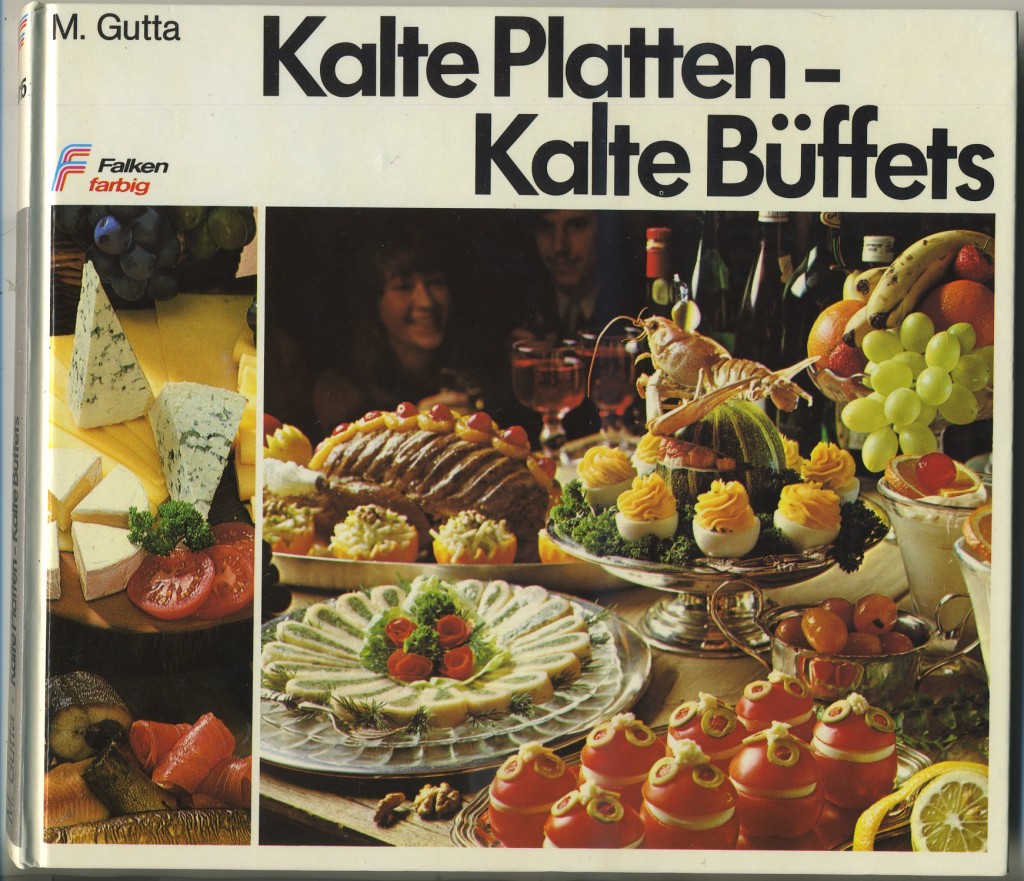 I found a small German recipe book called “Kalte Platten – Kalte Büffets” (Cold Cuts – Cold Buffets) from 1975. Not all in it is truly disgusting, but as you can tell from the pimento-stuffed olives on top of the stuffed tomatoes on the cover this book holds a few ‘pleasant’ surprises. 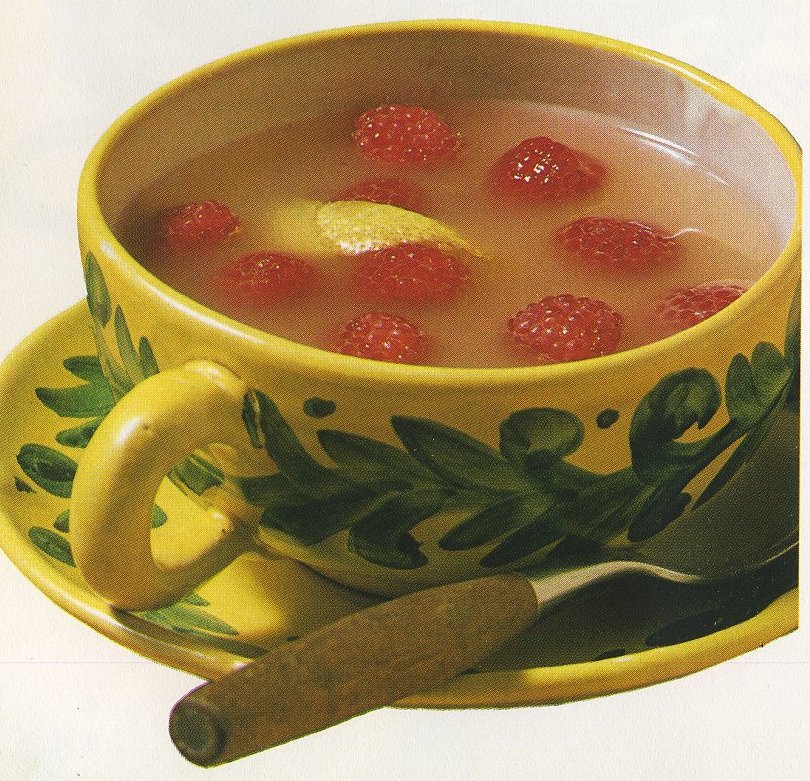 We’ll kick off with a cold fruit soup (Kaltschale), something that actually is rather popular in summer. This raspberry soup might in fact taste quite good, after all it is based on white wine, and the rasbperries are macerated in eau de vie. But the addition of cornstarch in order to give the liquid a soup-like texture turns it into a gooey visual nightmare.

A few pages later I could hardly believe my eyes. Could this really be true? This looks creepily familiar: 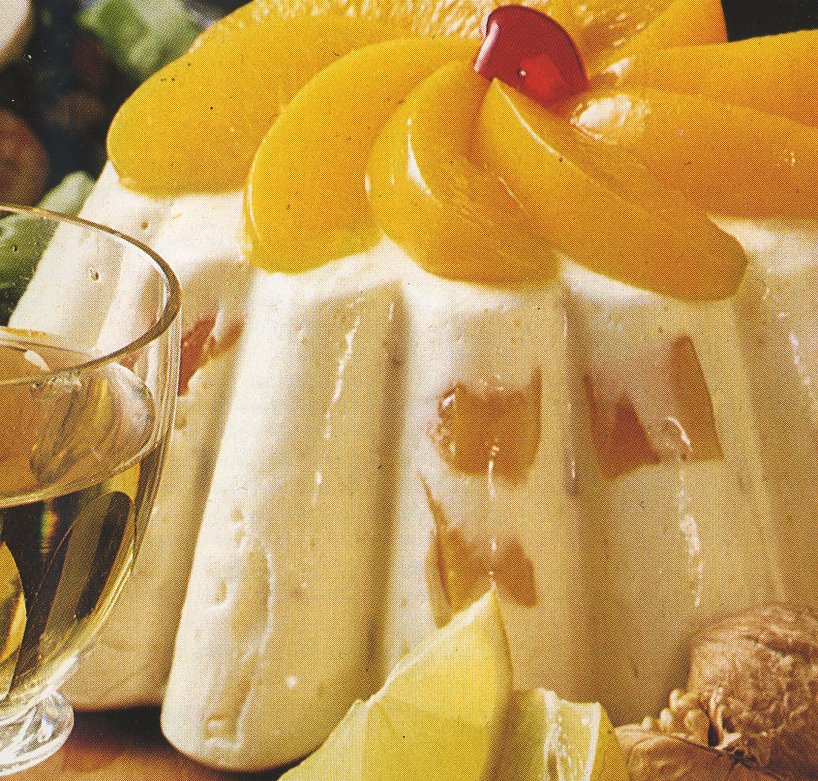 What might look like a harmless fruity dessert kind of congealed cream is in fact – almost a jello salad! Apart from milk, cream and canned peaches this aspic features chopped walnuts, ‘liquid onion’ seasoning (hugely popular at that time) and diced cheese. A true American-style jello salad must have some vegetables in it, but this is far more than I had expected.

The next picture shows something universally regarded as THE typical German food: sauerkraut. It is so German that there isn’t even an English word for it. Sauerkraut and hot or cold meat is indeed popular in Germany (and in neighbouring Alsace where it is called by the French word ‘choucroute’). But here it is served with a devious twist: 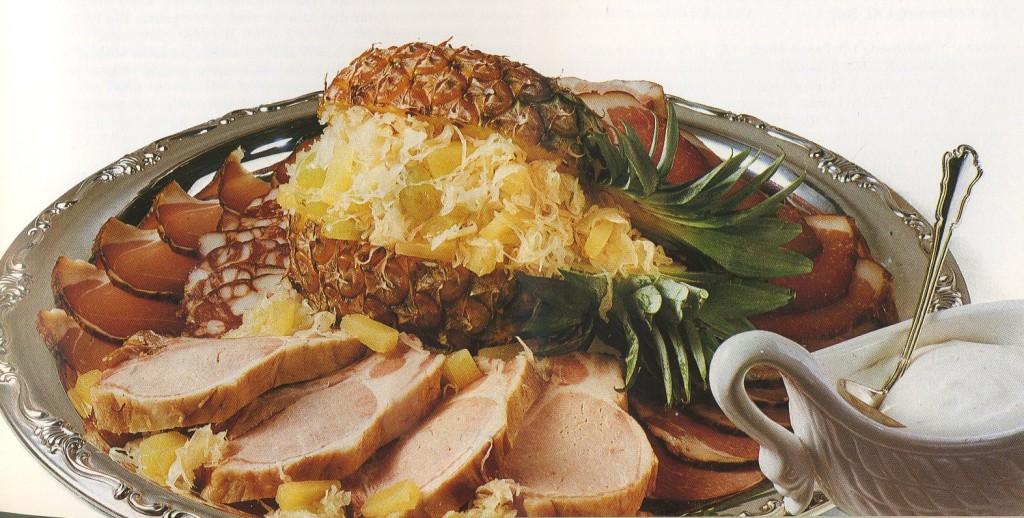 A nasty pineapple bursting with fruit-enhanced cold sauerkraut sits in the middle of all those delicious cured and smoked meats that Germany is so rightly proud of, thus ruining it all. The recipe even suggests adding grapes to that mixture. The white goo (sour cream? mayonnaise) at the right is not mentioned. I suspect it belongs to a different dish since this picture is obviously clipped from a full-blown buffet, but it could as well be meant to go with the meat. And how can you serve cured pork chops without mustard?

To finish off, here is a special treat thay you may have not seen before: 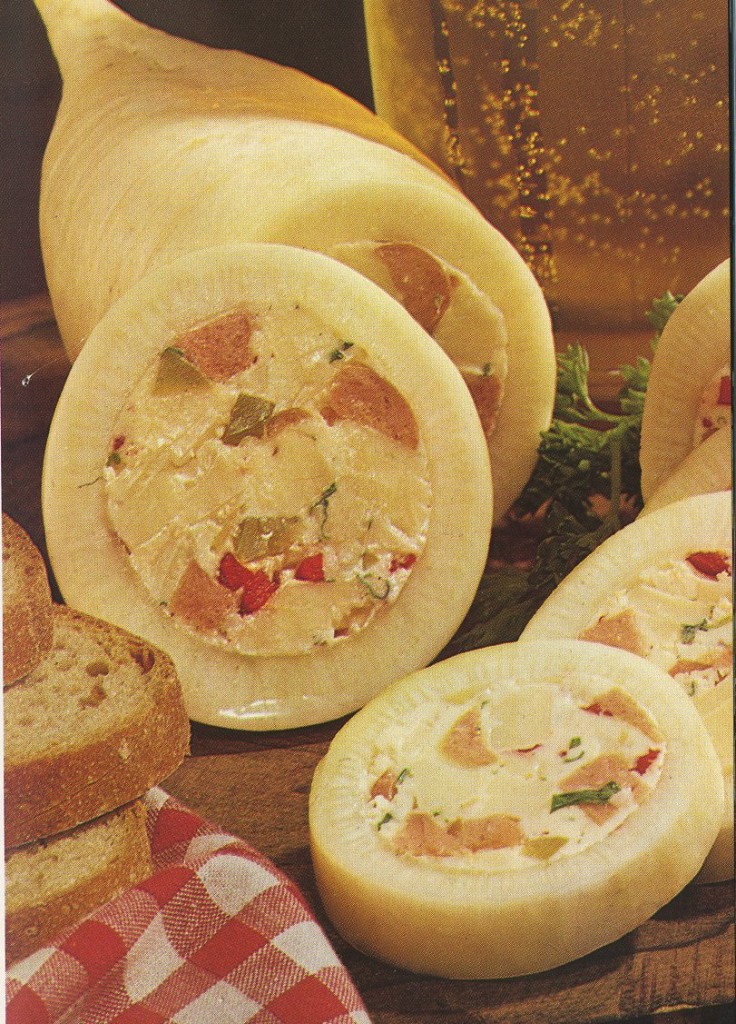 After months of being strangely fascinated by Jello salads in all their disguises, I have decided to make my own!

I am somewhat picky as far as vegetables are concerned, and many of those often found in jellos salads I don’t like at all, like carrots, celery or radishes. So I selected a couple of ingredients I normally don’t mind eating but still tried to keep it in the proper style. 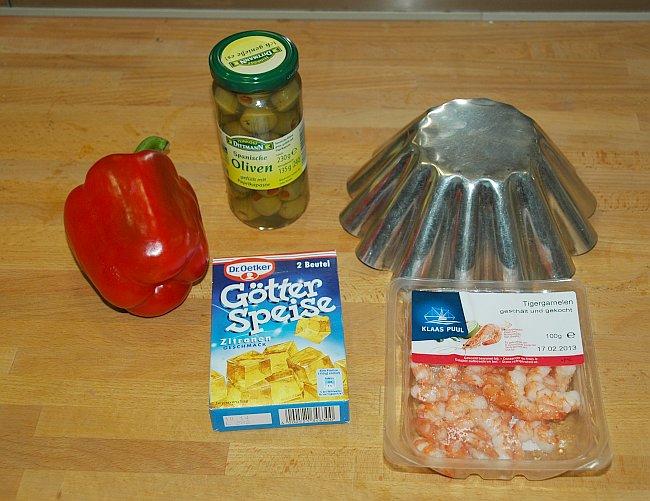 In Germany it would require some effort to get hold of US Jell-O, but Dr. Oetker ‘Götterspeise’ – ‘god’s food’ (!) – does the job just as well. We don’t have too many flavours here, but lemon is just perfect. Pimento-stuffed olives are a given, then I chose prawns and red pepper. I don’t own a proper jelly mold but my brioche mold also looks quite nice for it. The method of preparation was gleaned from yesterday’s Sequin Salad. Beware, klicking on the next pictures will open them in ‘shock size’ 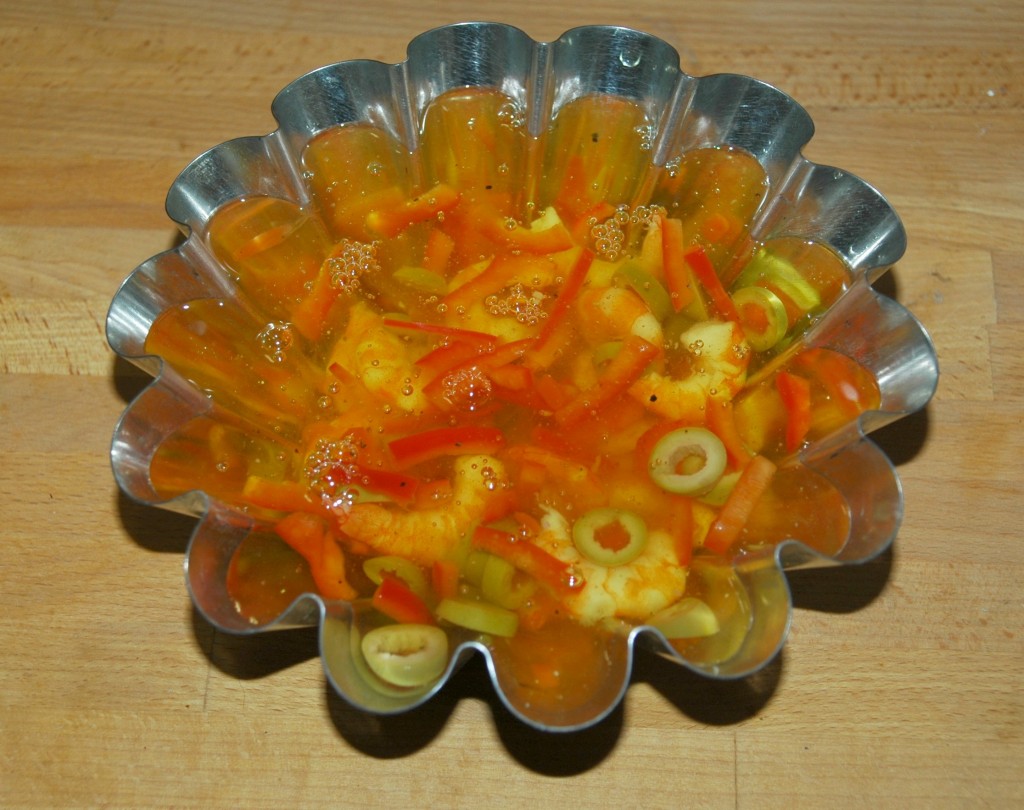 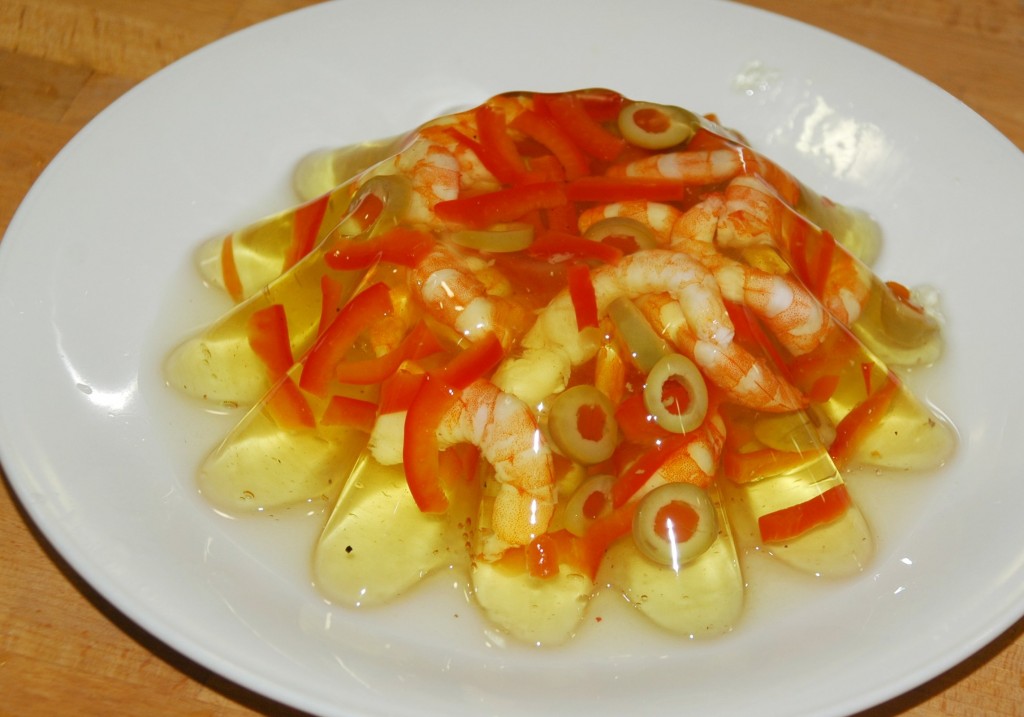 Maybe a few seconds too long in the warm water for un-molding, but the result looks convincing. 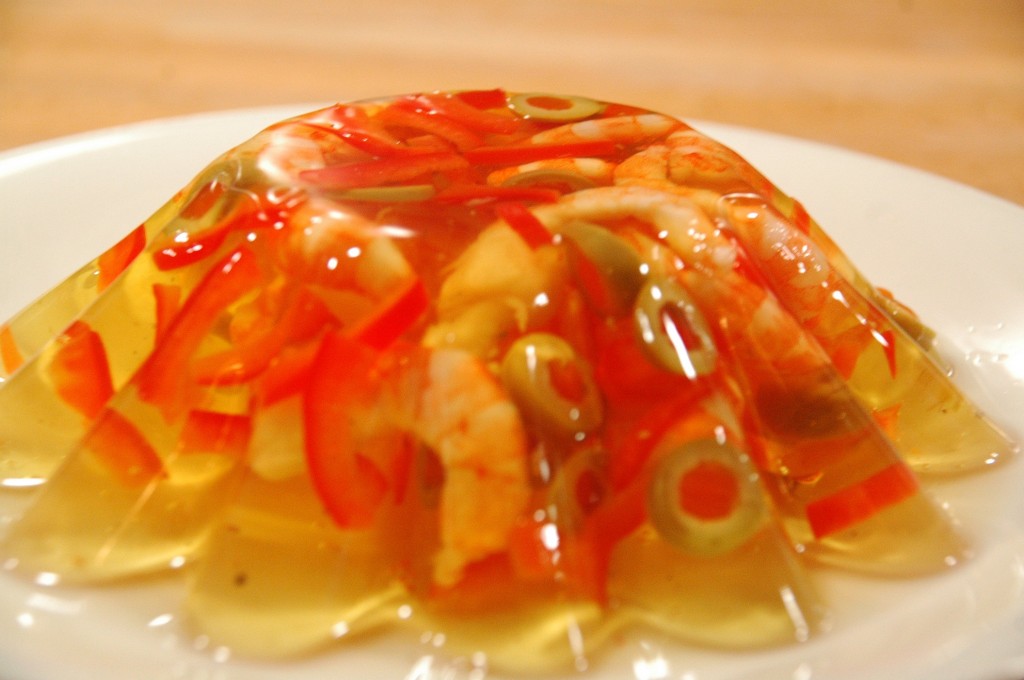 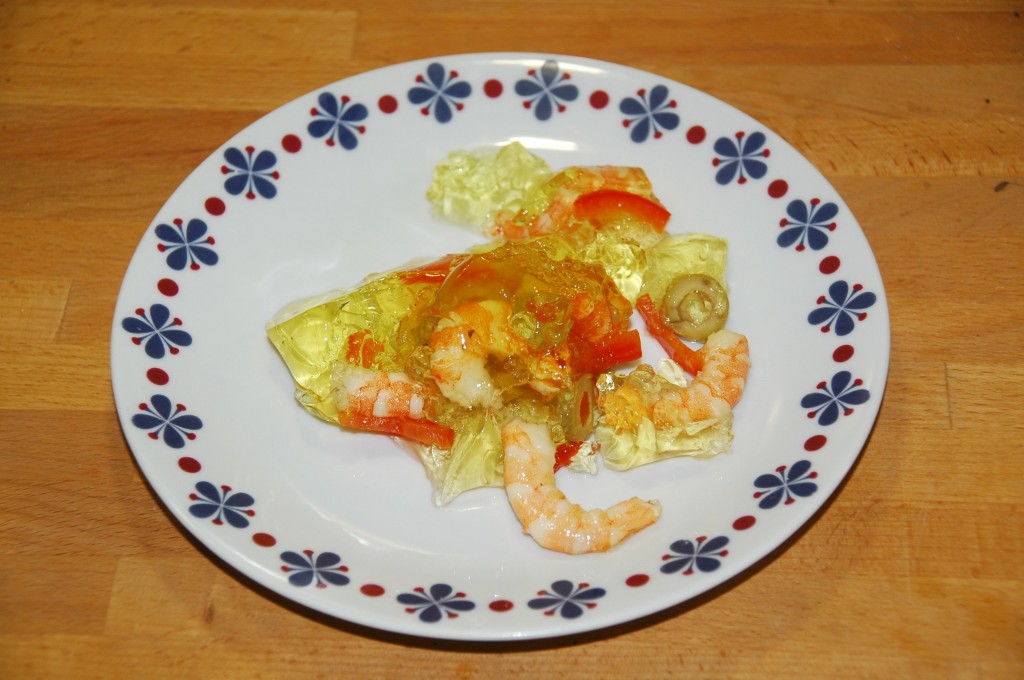 And ready to taste on my authentic 1960s serving plate

The taste: atrocious as expected. I ended up picking out all the bits and disposed the gelatin in the toilet. Even Mircale Whip wouldn’t have helped it to taste any better.

Here is another feast for your eyes, proudly presented by Del Monte: 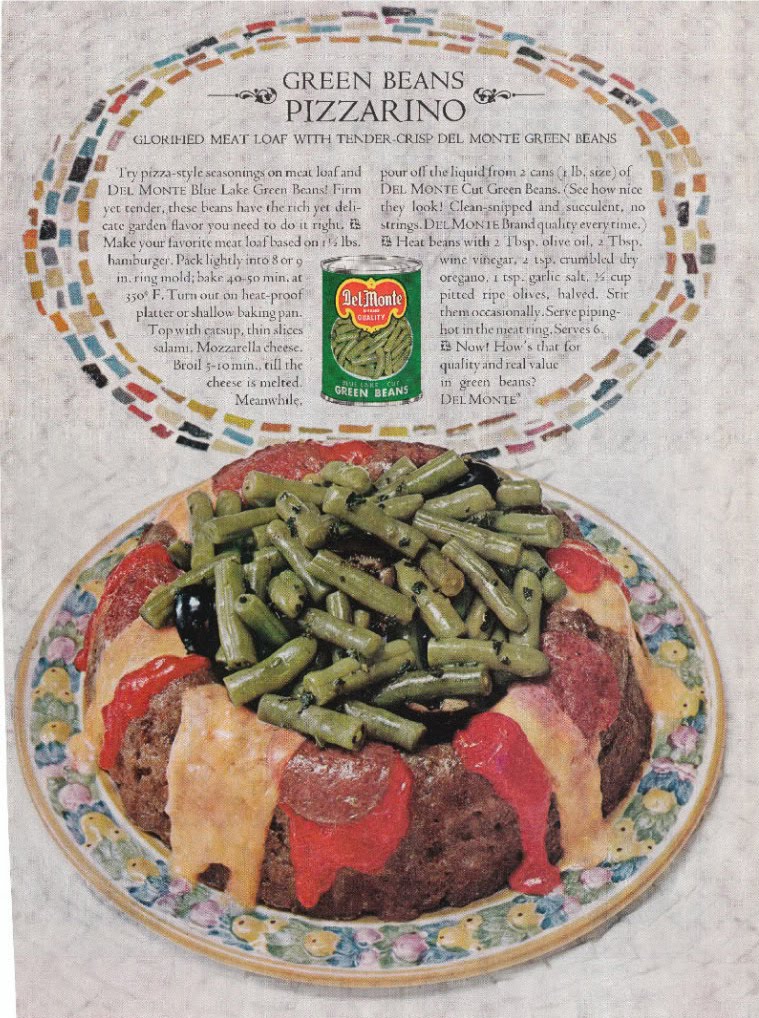 They call it a Glorified Meat Loaf. I call it an atrocity. Glorification for the ring of meat is obviously provided by cheese, catsup and salami that are draped over it in an almost obscene sloppiness. The green bean volcano crater lake doesn’t make this look one bit better.

Here we have a typical clear jello salad with funky vegetable particles floating in it weightlessly. 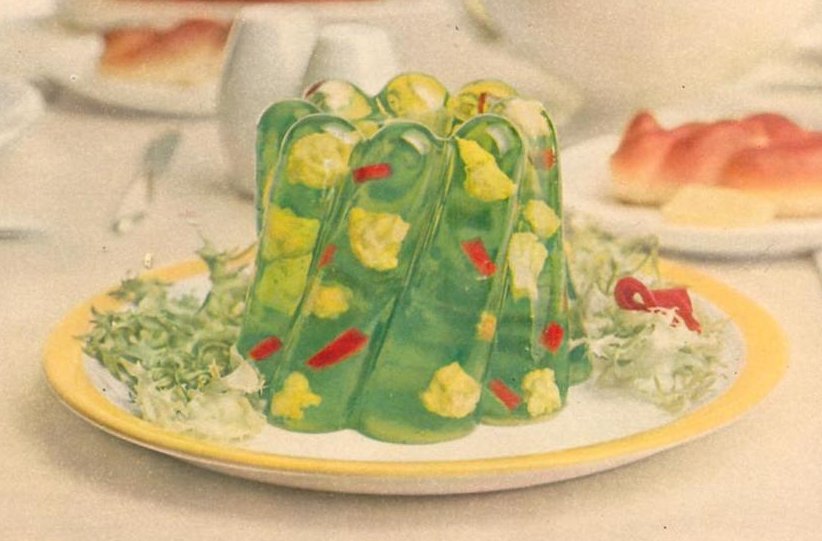 As if this wasn’t enough of an atrocity, a look at the recipe reveals another infamy:

The secret of success here is the use of raw cauliflower. With this ‘sequin salad’ (oh my…) you get the double whammy: crunch’n'goo in your mouth and extra action in your guts. 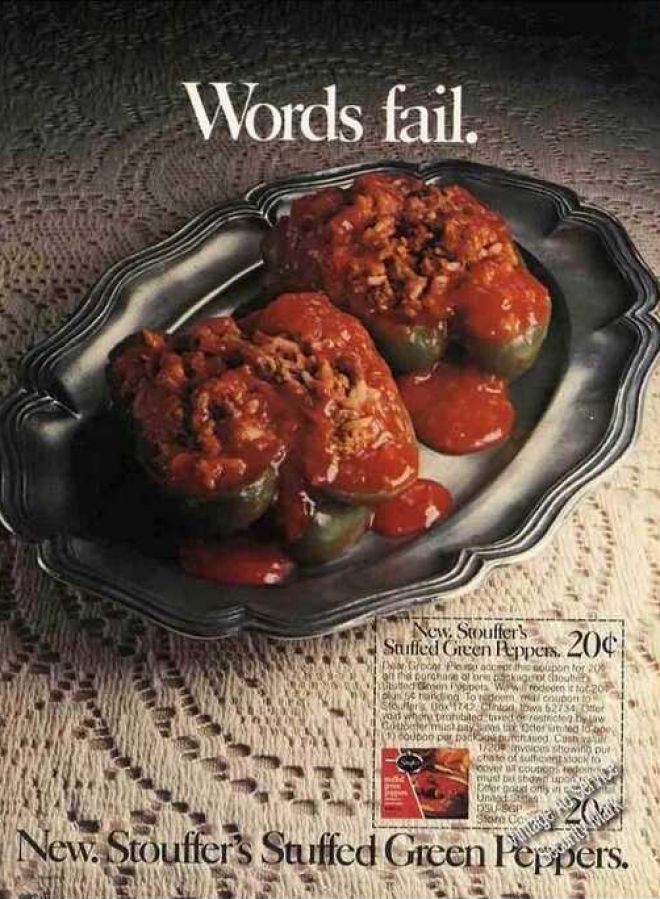 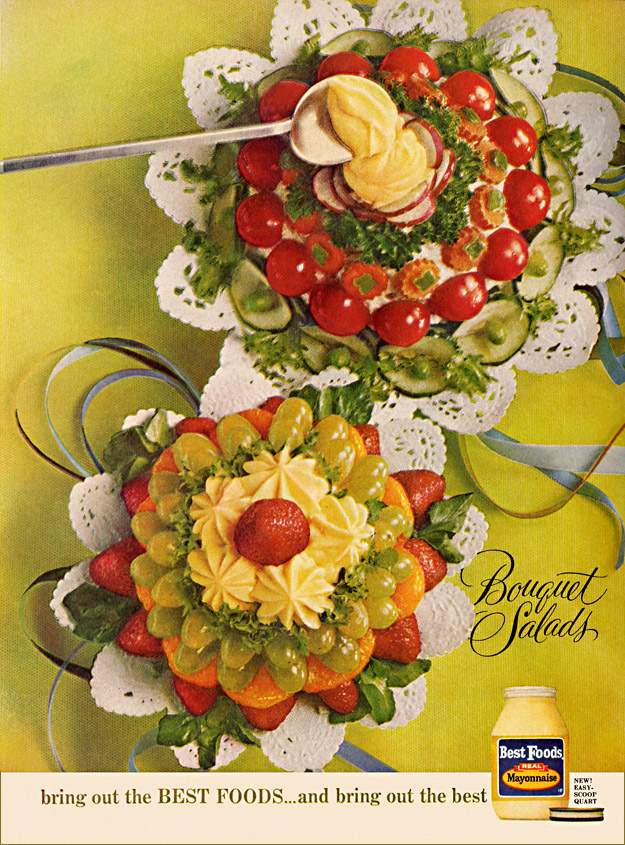 Only on closer look the artrocity becomes obvious here. Mayonnaise on a fruit salad sure adds another dimension. Does anyone actually eat that? 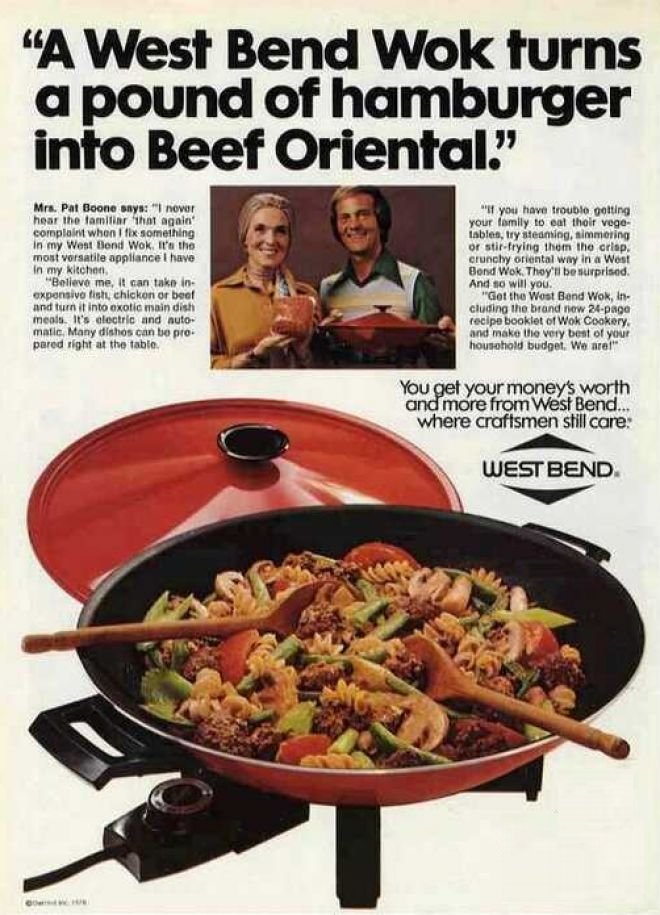 Beef Oriental – What an inventive name. Attributing this dish to a specific cuisine would require is to solve the riddle where the hell in the East spiral pasta is a major source of carbohydrates. What else is in there? Tomatoes, beans, green celery, chamipgnon mushrooms and a pound of hamburger. This definitely points to Little Italy as easternmost possible provenance region.